Top 10 Things to do in Ucluelet 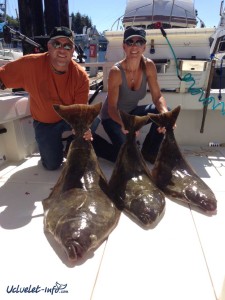 Fishing should be on your list for Ucluelet even if you are not a fisherman. It is one of the top places in the world for consistent ocean Chinook (King) salmon and halibut fishing. Chinook salmon are the top prized salmon for sport fisherman. Fishing here starts in March and by May the fishing really starts to pick up. Ucluelet boasts the largest area of feeding grounds for salmon and halibut from BC to Alaska. Halibut fishing is also good here and you can expect to get your limit of halibut on 8-10 hour trips starting in June and lasting in to August. Most companies do 4 and 6 hour trips in the afternoon and 8 hour trips during the mornings starting at 5:30. am. 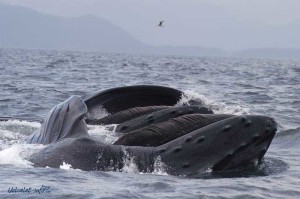 The whale watching has slowed down slightly the past couple summers but we are hoping for the return in Humpback Whale numbers for 2016. During March and early April, close to 20,000 Gray Whales pass close to shore during their long trip north. A few Gray whales will hang around Ucluelet and Barkley Sound. It is also possible to see Orca (Killer) whales though sighting tend to be rare. The past 2 summers there were more Orca whales around than normal, so you just never know what you are going to see.

Bear watching is another possibility and you can do this from boat or on land. The Thorton Creek hatchery close to Ucluelet is a great place to see bears during September. Many of the whale watching boats in Ucluelet and Ucluelet will do bear watching. 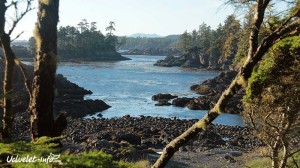 With some of the most stunning scenery to be be found on Vancouver Island, it’s only natural for Ucluelet and Tofino to be riddled with some incredible hiking trails and walks. A notorious highlight in Ucluelet is the Wild Pacific Trail. It is in two sections. The most popular section is the Lighthouse loop which takes 45 mins to 1 hour. Follow Peninsula (the main road going through town) south and it will be on the right side. 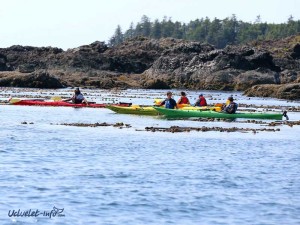 The Deer Group and the Broken Group inside Barkley Sound are becoming very popular places to kayak. You can go on half day trips close to the harbour or full day trips out into the heart of Barkley Sound.

Clayoquot Sound is also a popular place to kayak with taxis or tour companies taking you to the most scenic locations. If you paddle near open waters make sure you are prepared for stronger currents.

More on kayaking the Pacific Rim 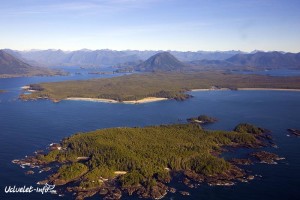 For more on the Ucluelet beaches 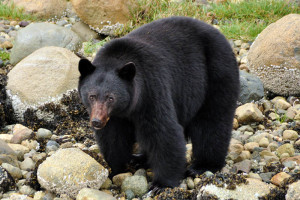 Wildlife tours can be done with Archipelago Cruises or the whale watching companies. Archipelago Cruises does a great tour through all the islands and here you can see whales, sea lions, sea otters, eagles, bears, wolves and more. The tour normally leaves during morning hours and is about 5 hours long. 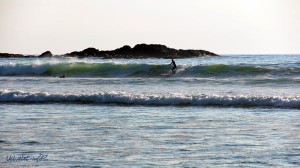 Just 30 minutes to the north of Ucluelet is the surfing town of Tofino BC, and surfing exists only 15 mins north of Ucluelet starting at Florencia Beach. There are surf shops that have recently started popping up here.  There are a few great surf schools in Tofino as well or you can rent a board from one of the local shops if you don’t have your own. The summer waves are generally the best for beginners and there are quite a few different beaches to give you variety in wave size. Chesterman beach is a popular beach for beginners. 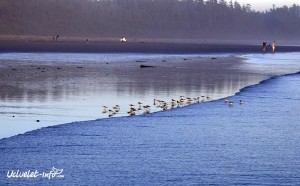 Bird lovers will be delighted by the Pacific Rim’s location along the pacific fly-way. Each year, thousands of seabirds pass by on their way to the Arctic – there’s even a festival for it. Spring is the busiest time for bird spotters, although summer can also be bustling. Areas like Chesterman and Long Beach are easily accessed and can have a number of birds along their shores. Another hotspot are the Tofino Mudflats, although they can be hard to access from land. 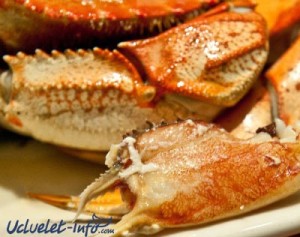 Lunch/Faster Food
A good vacation always needs some good cuisine to go along with it and in Ucluelet you can find some great seafood. Jiggers Fish and Chips and an oyster truck sit along the main road going into Ucluelet. Many of the local restaurants also serve seafood. Heading north closer to Tofino you can find Tacofino, a local favorite for lingcod tacos and a must stop. The Wildside Grill (same complex) has a great menu of seafood and regular food. The Red Can Gourmet is a newer place that opened just outside of Tofino and they are worth the stop in too.

Dinner
Norwoods, Black Rock Resort and Offshore are good places to try for seafood dinners. Many other restaurants will serve seafood on their menus usually consisting of fish and chips. 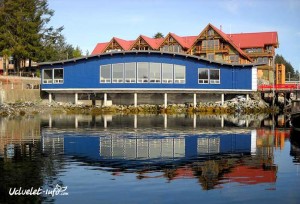 A tourist highlight, the Ucluelet Aquarium is an amazing catch-and-release hotspot aimed to educate visitors and locals alike about the amazing ocean ecosystem of the West Coast. Specimens collected in the spring are kept in tanks fed by Ucluelet’s own waters before being released back into the wild in the fall. Passionate staff create an interesting and hands-on experience, enjoyable to kids and adults alike.