Ucluelet, pronounced you-KLEW-let, is located on the West Coast of Vancouver Island ~fifty miles west of Port Alberni. The name Ucluelet means “people with a safe place to land” and it originated from the local First Nations people.

The population in Ucluelet is comprised of about 1627 people and is on the rise. Its climate is oceanic, having cool and dry summers with mild and rainy winters. The temperatures rarely go above 30C and beow -10C.

The precipitation averages around 3,350 mm (132 in) per year, which is quite high, although most of it is concentrated in the winter months.

Tourism is a major part in this town’s economy, and rightly so. There are many mesmerizing places waiting to be discovered.

Ucluelet lies between Long Beach and Barclay Sound. Surfers and beachcombers from throughout the world are attracted to this island. The 10 kilometers of white sand makes it a great place to take a stroll during the sunrise. There are trails that take hikers into scenic forests.

This is truly a gem of this community. Californian sea cucumbers, jelly fish rock fish, clams, starfish, green surf anemones, are just some of life forms you can see at this aquarium. The creatures are taken from the local waters, however they are returned back into the ocean at te end of the season.

Ucluelet is a perfect destination for those looking to escape the urban lifestyle. Here, you will find no billboard ads, no traffic jams or superstores. Instead, you will be connected with the nature. 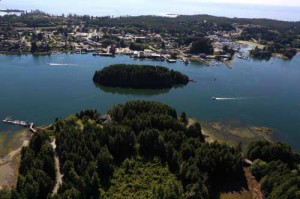 The history of Ucluelet starts in 1787 when maritime traders, such as the famous captain of Imperial Eagle, Charles William Barkley, arrive in Barkley sound. Back then, sea otter pelts were in great demand. After some time, around 1870, a fur trader who owned plenty of ships decided to establish a trading post in Ucluelet. With this development, new people moved there and just after 20 years, in 1890, Ucluelet became a town. People kept moving to Ucluelet hoping that a road from Port Alberni will be built.

After 1890, Ucluelet has seen a sharp rise in the community population. A Mission House and school was build by The Presbyterian Church—in 1898 a doctor arrived to the area. The following years have seen further development, a lighthouse, government telegraph office and lifeboat stations were built. The Canadian Pacific Railway initiated a freight boat sailing from Victoria, few times per month. A very important even is the establishment of a whaling station in 1903, which paved the way for fishermen—with 1915 bringing the commercial fishing industry to Ucluelet.

Florencia Bay a few minutes north of Ucluelet, previously known as The Wreck Bay, attracted many prospectors and campers for the purpose of panning gold during the 20th century. Being comprised of fine gravel and thin beds of blue clay, this bay accumulated the muchdesired gold near the base of the cliffs. The origins of gold is not exactly known, but according to the Ministry of Energy, the gold might’ve appeared from the quartz veins, abundant on the west of Kennedy Lake. Most of the gold have been mined during the 1899-1902, the Annual Report 1900 showing 23,996 grams of gold having been removed from the bay.

With the advent of second world war, a seaplane base has been built in Ucluelet. South of Tofino, the Canadian government built a military base.

A landmark in Ucluelet’s history marks the opening of the road to Port Alberni, which made way for the commercial fishing industry, and thus attracting more people in the town. At some point in time 3 fuel stations could be found along the Ucluelet inlet. The season for harvesting herring, cod, salmon, halibut and pilchards started. As the industry developer further, ice plants, buying stations and canaries were found along the harbor. It was a golden age for fishing, as the limits of fish weren’t imposed yet, and the commercial boats were free to harvest whatever they could bring in.

Forestry was another important player in this city’s economic growth. The timber industry is affected by different seasons, so when the demand decreased, a new economic player joined the game: Tourism. Tourism now is the largest player in the economic growth. There are many things that attract visitors in this unique city: many trails with mesmerizing scenery can be found on the rugged shoreline, different species of hemlocks, cedars and furs. Popular activities include whale watching, hiking, kayaking, hotsprings tours, zip-lining and atv tours.