Surfing in Ucluelet is a great idea for any avid surfer. Not only do you not get crowded beaches, you get a great laid back surfing culture of people living to surf. You will find every level of surfer there, so you have to be the best to fit in. While surfing is a huge draw, Ucluelet also has much more to offer as well. 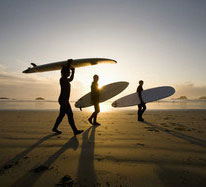 Surfing in Ucluelet is a pastime that has existed on this small Vancouver Island town since back in the 1970’s. It has since grown into one of the most popular surfing destinations in all of North America and is known as the “Surfing Capital” of Canada. The sandy shores and smaller wave options make Ucluelet a great place for amateurs to learn because the sand of the ocean floor is more forgiving to land on than most other beaches that have rocks or coral blanketing the floor below the water. The open shores also invite many pros who find swells creating waves up to 15 feet and higher during the winter months. In the summer however, pros and amateurs alike are strewn about Ucluelet catching bigger waves further from shore or smaller ones closer to shore.

It is estimated that more than 50% of people who call Ucluelet home surf on a regular basis. Ucluelet is host to 4 different Surf Schools that have sprung up over the last decade due to the town’s growth in surfing popularity. The water temperature year-round in Ucluelet only fluctuates about 10 degrees from winter to summer making it a great location for serious surfers who do not mind the stormy weather that Ucluelet is known for during the harsher fall and winter months. The swells created in the winter months create the largest waves of the year and for that reason many surfers will brave the wind, rain and even snow to surf some of the most radical waves of their lives.

In the summer, some will surf as late as eleven o’clock at night due to the glowing sunset that illuminates the sky with a golden hue reaching to the sandy shores. After an enthralling evening surf, many enjoy a tasty beach barbecue mixed with the sound of laughter and waves breaking onto the shore.

Because Ucluelet shores provide vast shorelines, the beaches are seldom crowded with surfers allowing every surfer the space needed to tear up big waves or learn on smaller ones without interfering with one another. The views on the shores of Ucluelet are reason enough for many surfers to keep coming back to Ucluelet year after year. The view from shore stretches across the horizon with audacious colors of sunrises and sunsets leaving an unforgettable impression on the mind having already received a euphoric surfing experience. 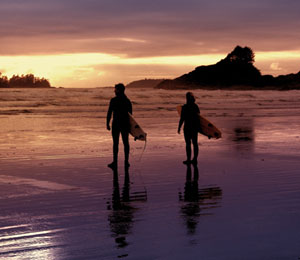 Ucluelet is one of the world’s premier cold-water surf sites. The water temperature in the winter is not much colder than it is in the summer and the winter storms that tear through the Vancouver Island coast make it ideal for surfing. Surfers from all over North America’s west coast will make their way up or down the coast to hit one of the best places for surfing on the continent. Many who reside in Ucluelet year-round live there for the amazing surf available from the months of November through February.
In 2009, Ucluelet hosted the first ever Association of Surfing Professionals on Canadian soil earning Ucluelet the official title of “Canada’s Surfing Capital”. Long before this however, it was already the most popular surfing destination for most people on the North American west coast. Whether you are an avid or pro surfer Ucluelet is the place to surf in North America. With forgiving open sandy shores, great swells and breathtaking views to boot, Ucluelet has become one of the world’s increasingly more popular surfing destinations. Ucluelet is awaiting your arrival to give you not only one of the best surfing experiences you will likely ever encounter but also one of the most refreshing life experiences you will ever enjoy.