Maps of Beaches and Trails 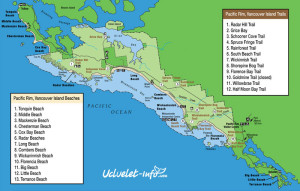 Ucluelet and Tofino are known for their plethora of incredible beaches. Take a peek at our beach maps to get a feel for the area’s trails, beach options, and to help choose which one you want to visit first! The largest and most famous beaches are Chesterman and Long Beach, but the smaller options are just as stunning, while offering a bit more intimacy and seclusion.

The relaxing 10-minute rainforest walk to get to Combers sets the mood for what’s to come from this beautiful beach. Rocky outcrops create endless exploring opportunities at low tide, where the resulting tide pools are filled with ocean treasures and creatures. Soft sand beckons warmly and makes for the perfect lounging spot, while Sea Lions are often having fun on their favourite rocks nearby.

Protected by a few rocky outcrops, Mackenzie Beach is filled with calmer waters, making it a popular family beach. It’s also a great location to launch a kayak from. Even on a windy or stormy day, the sand and sea of Mackenzie stay relatively relaxed. Aside from kayaking and family fun, this is a popular beach with a secluded atmosphere known for classic beach activities like bocce ball, swimming, beach combing and frisbee. 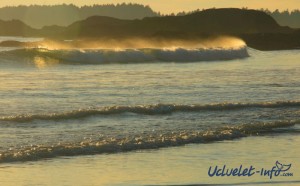 With 10km of soft, golden sand to its appropriate name, Long Beach is the longest beach on the west coast of Vancouver Island. Due to its location in the Pacific Rim National Park, the beach is well-kept and there is plenty of parking. It has the title of being one of the first beaches to be surfed in British Columbia, and has remained a popular spot to do so. On top of that, the expanse of sand is a haven for runners, walkers, kite-fliers, frisbee players, sun-bathers, children, skimboarders and any other type of beach-goer imaginable. It’s also proven to be a fantastic storm-watching location during the winter months. Romantic sunsets, panoramic views, the occasional whale and plenty of sports, there’s always room at Long Beach and never a dull day. 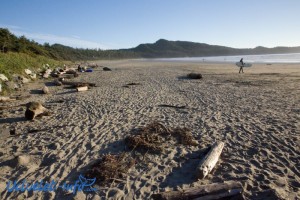 Aka. “Surf Beach,” Cox Bay is tucked into the coast between Rosie Bay and the Pacific Rim National Park. Given its nickname, it comes as no surprise that the area is one of the most popular surfing hotspots on the west coast, and maybe even all of Canada. The reason for that is due to its shape and west-facing shores, which amplifies nearly any direction of swell and create a delightfully consistent break. The consistency has been key in drawing numerous competitions to its shores such as the O’Neill Coldwater Classic. Cox Bay’s name is as legendary as its break. It was named after John Henry Cox, a British fur merchant and trader who organized some of the earliest expeditions to the Pacific Northwest. A family element is added to the atmosphere of Cox thanks to Pacific Sands Resort, which was built just back from the beach as a holiday resort in 1973. Shockingly, the warm summer months find this beach relatively quiet, so it makes for a great escape from the other beaches in the area during peak season.  Access to Cox Bay is granted through a 15-minute rainforest trail that opens up to the stunning vista and 1.5km of sand. Find it just north of the Pacific Rim Park. 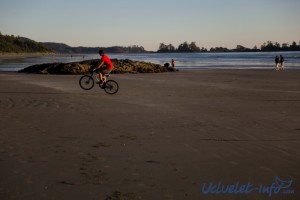 Although the west coast is filled with incredible beaches, Chesterman Beach, named after an early settler of the area, takes the title as Ucluelet and Tofino’s favourite beach. The reasons are plenty: the 3km of beach stretch from a more family-geared south end, to a surf-pumping north, so it appeals to nearly any kind of beach-goer imaginable. While the north end can can see big swells and is a favourite for more seasoned surfers, Chesterman has also been ranked as one of the top 10 places to learn how to surf in North America. At low tide, sea caves and tide pools can be explored by curious kids, and adventurers can make the crossing to Frank Island at the tip of the Chesterman Spit. Its expanse of sand allows for bocce, skimboarding, kite flying and some good old-fashioned sunbathing as well, not to mention the place is stunning at sunset. Aside from locals and tourists, Chesterman is frequented by a variety of wildlife including shorebirds, whales, otters and osprey. All-in-all, this particular beach is one that anchors life for the citizens of Ucluelet and Tofino. Access Chesterman along the bike/foot-path at the north end.

Within walking distance of downtown Tofino lies Tonquin Beach. It is a short, but sweet beach with a quarter of a kilometer of soft sand and intriguing rocky outcrops to its name. To access the beach, visitors get to explore the peaceful Rainforest Trail, located at the end of Tonquin Beach Road. The charming boardwalks and bridges that cut over a deep rainforest ravine and the well-kept dirt path eventually open up to the secluded beach after about 1km. Due to its western location, those in town around sunset can easily pop out to catch the last of the sun’s rays. The beach is also at the end of the peninsula, so casting salmon is a common occurrence – caught coho are often cooked right there on a fire for a fresh salmon dinner. Aside from salmon, whales and otters can sometimes be spotted. Although Tonquin is not a surfing destination, it makes the list of many for a relaxing beach escape. 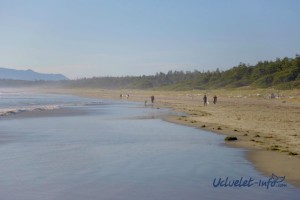 Wick, as it is fondly known by the locals, is a one-of-a-kind in the Pacific Rim National Park and is the closest surf beach to Ucluelet. It’s a mere 15-minute drive away. Back in the day, Wickaninnish Beach was known as Long Bay, due to its location at the southern end of Long Beach. It is just above the 49th parallel between Portland Point and Quisitis Point. Because it marks the end of Long Beach, the collection of flotsam, jetsam and driftwood is extensive compared to any other beach on the Island. This, along with its unique collection of sand dunes, has made it a favourite for beach explorers. People aren’t the only ones who love to explore the dunes, however, and visitors should be wary of the wolf population that seek shelter in the sandy outcrops. The contagious, authentic west coast vibe, endless areas of exploration and decent break, make Wickaninnish a hotspot for groups of beach-goers with mixed agendas. 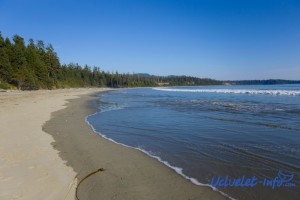 For such a pleasant beach, Florencia Bay originally went by a more ominous name: Wreck Bay. Back in 1860, a 200-tonne brigantine capsized near the Island and, after being deemed repairable, was being towed back to Victoria. Enroute, the ship towing the brigantine experienced engine trouble and had to cut the ship loose. It was then a massive storm blew in, wrecking the boat along the shores of the bay. The brigantine had been called Florencia. This brilliant bay is accessed by Willowbrae in the south and Wick Road in the north. Its sandy u-shaped shores are hugged by steep, jagged cliffs and numerous driftwood logs invite guests to take a seat. From the ocean beckons a steady stream of inviting waves, making it a great location for those looking to surf, relax, swim or explore. Even better, Florencia is often quiet, as its access trails are tucked into the coastal rainforest. A wooden staircase adds the final touch to either access trail. Because of its secluded atmosphere, Florencia Bay is a favourite among couples seeking a romantic, sunset location. It is a uniquely shaped beach with plenty to explore and its forest access means plenty of wildlife call the area home – be sure to keep an eye out for bears, wolves and cougars. Sea lions are also known to play in the Bay, joining in for the occasional surf.

A small, private beach, Middle Beach can only be accessed by the trail located beside its namesake lodge.

Schooner Cove involves a little bit of work to find, but is a favourite amongst those who know it. Sheltered from the wind and with a number of different beaches, as well as the cove itself to explore, the place is often quiet and will feel especially secluded compared to most of the other beaches in the area. Located along the northern side is Portland Point, a rocky headland offering the opportunity for casting and spotting whales. The cove’s soft sand, littered with rock outcrops and a variety of sea life, is often considered one of the most romantic beaches on the Island because of its intimate seclusion. Increasing its desirability, an elegantly crafted boardwalk weaves its way through massive cedars and hemlocks on a short, forest-embraced beach access trail.

Just 15-minutes east towards Port Alberni, Kennedy Lake’s claim to fame is that it is the largest body of fresh water on Vancouver Island. It’s probably one of the most scenic, too – it is surrounded by steep, often snowcapped, mountains in the northeast, and intriguing, low-lying land in the west. Kayakers, canoers, swimmers, windsurfers and fisherman can be seen cutting through the mountains’ reflections in the water and the 258-hectare surrounding park is popular for its picnic area and boat launch. Unmarked pullouts are scattered along the roadside, granting access to the park, and it is often a popular spot to see Black Bears and spawning Sockeye in the fall. When fog banks refuse to burn off on the coast, this is the perfect destination to soak up some summer sun, as it is often 10 degrees warmer and bathed in sunshine compared to the west coast on foggy days.

Across from Meares Island is a small, rocky beach known as Grice Bay. It is a well-known launching point for many kayaking, boating, hiking and wildlife tours, and it grants access to numerous adventure destinations such as Meares Island, the Tofino Inlet, Cannery Bay, the Kennedy River, Mosquito Harbour, Dawley Passage Provincial Park, the Tranquil Inlet and the Fortune Channel. More than anything, Grice Bay is a place to kick off a new expedition. Its parking lot is well suited for boat trailers and many of the areas it grants access too are known as some of the best and most beautiful kayaking destinations in BC, such as Clayoquot Sound, with incredible forest and ocean views paired with flourishing wildlife habitats. To get a good look at the possibilities that await, a small grassy knoll at Grice Bay provides a stunning, seascape view that is often dotted with Eagles and Great Blue Herons as they pass by.