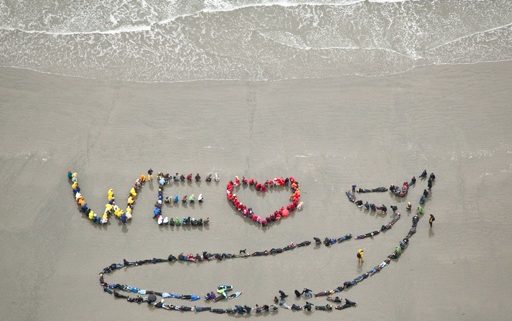 Walking along the Artist Loop of the Wild Pacific over the weekend, I was stopped by a couple that seemed as though they could hardly contain their excitement.

“Did you see them? There are whales just off on the horizon!” I hadn’t seen them and, as the couple mentioned, they seemed to be moving the opposite direction as me. Disappointed, I continued on my way. By the time I reached the Stormwatching Deck, I’d given up straining my eyes towards the ocean. As a last ditch effort, I felt the need to stand at the end of the platform. Poof. The sudden burst of mist came up just beyond the rocks off the end of the deck. I couldn’t help but break into a delighted smile. Watching closely, more puffs appeared and faded as a few whales slowly cruised by the coastline. No matter how many times I see a whale, I’m always a combination of humbled, happy and amazed. My smile widened as I realized it was time for the Gray Whale migration to pass by the Island. There would be plenty more where those came from. It also meant it was time for one thing: The Pacific Rim Whale Festival.

31 years ago, the Pacific Rim Whale Festival (PRWF) was held for the first time. What started as a fun and unique way to create awareness about the delicate ecosystem of the west coast, our distinct coastal traditions and the (then) endangered Gray Whale population is now a favourite festival for the citizens of Ucluelet and Tofino. Today, the number of whales returning to our coastal waters is much stronger—nearly 20,000 Gray Whales pass by each year—and the festival is larger and busier than ever.

Gray Whales are typically 14m or so in length. That’s longer than your average school bus! They get their name from their colour and, while lacking a dorsal fin, possess a number of bumps along their lower backs. After having their calves in the balmy waters of Baja, it’s time for the Gray Whales to eat. Cooler waters provide the whales with their steady required diet of small crustaceans and tubeworms. So, up North they go! Depending on how far they travel, the migration can be anywhere from 16,000km to almost 23,000km round trip. That many kilometers definitely deserve a celebration.

Between Tofino and Ucluelet, there are numerous events to attend. Some are geared towards the educational side of things such as guest speakers that come to talk about the ecosystem. Others include the cultural side of the area such as traditional arts and crafts, or Dug Out Canoe Tours. The rest… Well, those are just plain fun. My personal favourite is the Chowder Chow-down. In leeway of an admission fee for most of the events are what the PRWF calls a Button Event. Locally designed by the kids of Tofino and Ucluelet, the buttons are by donation ($5 minimum suggested), and give you access to plenty of the festival’s highlights. Of course, it’s also a great time of year to go whale watching as well. While on the water, you’ll often see their great, spotted backs, and the flash of a tail as they dive below the surface.

Even in the midst of pre-festival preparations, Susan Payne, festival coordinator, took the time to have a conversation with me about PRWF. When I asked about whether or not she though they achieved their goal of creating more awareness about the delicate ecosystem of the Pacific Rim, her response opened a window into just how far the festival reaches, and how it has developed with the current times and challenges:

“Many years ago, the festival committee wanted to focus a bit more on the educational side of the festival and increase awareness in many of its ecosystems that effect us all. We have been moving to that end since, and this year we have 15 really awesome speakers throughout the festival speaking about whales, microplastics, amphibians and a whole lot more. You will not only have a ton of fun here, but are guaranteed to learn something too! Our motto: Inspire, Educate and Entertain is what the festival is all about!”

With such a special, natural occurrence arriving at our shores, the festival itself is a unique aspect of the Tofino and Ucluelet communities. To check it out in detail, visit the festival website at www.pacificrimwhalefestival.com